A summary of the Rust Foundation’s activities in October, November, and December 2022 – plus a wide-angle look at 2022 as the year concludes. 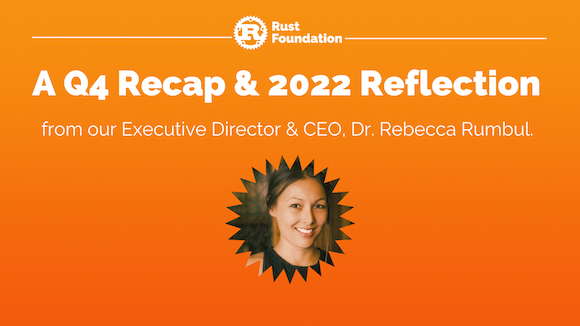 With a new year just a few days away, we’re rounding out our quarterly recap series for 2022. In this post, I’ll summarize what our team accomplished this past quarter, milestones that arose from key Rust Foundation initiatives, and where we stand as a Foundation going into 2023.  #

As always, we encourage you to check out the main Rust blog and the "Inside Rust" blog for recent Rust language updates and news directly from the Project.

2022 was a year filled with administrative groundwork as we established the Rust Foundation staff team and created a staffing framework fit for growth. In Q4, we filled two important full-time roles that I believe are already setting up the Foundation for meaningful impact in 2023.

The Rust Foundation’s first hire in Q4 was Gracie Gregory, who joined the team as our new Director of Communications & Marketing. In this role, Gracie has taken on the work of communicating the Rust Foundation’s mission to a global audience, establishing our narrative strategy, working with the press, storytelling with consideration of the Rust Project, the Rust Community, the Rust Foundation’s Members, and much more. In short, this was a key role to fill at the Foundation. Gracie got to work straight away and you’ll get a glimpse at everything she’s taken on throughout the rest of this post.

Just a few weeks after Gracie’s arrival, we welcomed Sage Griffin to our team as Communities Advocate. Many of you will already know Sage, as they have been an active and valued member of the Rust community for many years. Sage was the perfect person to fill this position, which exists to support collaboration with Rust leadership, and Rust communities around the world.

I’m so pleased that our search to fill these roles resulted in Gracie and Sage coming aboard. I believe their expertise is helping drive positive collaboration between the Rust Foundation and the wider Rust Community.

In Q4, we also opened recruitment for a Security Engineer role, which was made possible thanks to generous financial support from OpenSSF Alpha-Omega and in-kind support from Platinum Member JFrog as part of our Security Initiative. This position is now closed to new applicants as we are wrapping up the hiring process. I look forward to announcing our new Security Engineer in the coming weeks!

Finally, in December, we opened up two additional software engineering roles, which are still open (at the time of publishing this blog). One of our Software Engineer roles is dedicated to security support in the Rust ecosystem, while the other will be crates.io-focused. Prospective candidates can learn more about these open roles on our careers page.

We look forward to finalizing these recruitment exercises early in the new year and hope that you will see a beneficial impact very soon.

From October through December, we continued to work on updating our trademark policy, with input from our Trademark Working Group (composed of Rust Foundation staff members, Project Directors and leaders, Corporate Members, and legal counsel) across several meetings. We are in a good place in terms of having an almost-finished draft, and our current focus is on adding a “plain English” summation of important points within the policy.

Additionally, we have been fundraising for the 2023 Community Grants Program, to continue supporting maintainer work in the Rust Project and ecosystem. We are grateful to Rust Foundation Members Google, AWS, Zama, and Tag1 for their generous recent donations.

Please stay tuned for specific 2022 financial figures in the forthcoming Rust Foundation Annual Report (more on this below).

In Q4, we welcomed our newest Corporate Member, Shopify, who joined as our first Gold Member. The Rust Foundation’s Gold membership tier reflects a genuine commitment to the future of Rust and its community, and we are delighted that Shopify has decided to invest in Rust and the Rust communities.

I want to thank the entire Foundation team for their hard work on this latest round of Project Grants. It takes many complex elements to make the Community Grants Program run, from Paul’s continuous work on the application and grantee communication to Sage’s detailed feedback for any applicant requesting it.

An additional thank you to everyone who applied for a grant this past round. To our upcoming grantees, congratulations! To the applicants who did not receive an acceptance email, please know that our team would be thrilled to see another application from you in the future. Either way, we consider you a part of our community, and The Rust Foundation is here to support you in a variety of ways.

If you have any questions about the Community Grants Program, please do not hesitate to reach out at grants@rustfoundation.org.

We took on more meaningful communications work than ever in Q4 due to Gracie’s arrival in October as our first full-time Director of Communications & Marketing.

Shortly after Gracie joined our team, we headed to Berlin for EuroRust 2022, where we chatted with the local Rust community, listened to some fantastic talks and sessions, and enjoyed a relatively rare opportunity to connect in person. Thank you again to the organizers for putting on such a valuable event!

In Q4, we had a full publication schedule for our blog that included several guest blogs and a brand-new series that highlights the work and accomplishments of our Fellows and Grantees. If you haven’t checked out the developing Community Grantee Spotlight series, I encourage you to do so here. Keep following our blog for more profiles on our amazing Project Grantees and Fellows!

We also developed our first-ever Rust Foundation Annual Report for 2022. This document provides a look at our finances, activities, and milestones over the past year, and will be published in early 2023.

Finally, I would be remiss not to mention all the positive Rust-related news in Q4. In November, WIRED magazine published a positive story about the recent ‘Rise of Rust’. Later, we received the exciting news that Rust was making its way into Linux 6.1. While Rust’s presence in the kernel is still in its early days, this development was a big step forward for Rust. It will be interesting to see the next step with Rust in the kernel in 2023. You can find comments on Rust in Linux 6.1 from myself and Joel Marcey in this article from SD Times.

In short, our team was quite busy with communications and marketing-related work in Q4. I’m excited for that to continue in 2023!

This past year at the Rust Foundation was one of change, growth, and groundwork that will enable us to further our mission to steward the Rust programming language and support the Rust community going forward.

Given the ever-increasing popularity and awareness of Rust, the timing of our recent team growth couldn’t be better. In the 23rd edition of their State of the Developer Nation report, SlashData reported that Rust is one of the two fastest-growing languages globally, having nearly tripled its community of users over the past two years.

To quote the latest State of the Developer Nation report:

“Rust has formed a strong community of developers who care about performance, memory safety, and security. As a result, it has seen increased adoption in IoT software projects, but also in desktop and game development, where Rust is desired for its ability to build fast and scalable projects.”

I speak for my entire team when I say it is a privilege to serve this global community of thoughtful, dedicated people working to build a more secure, performant, and efficient technological future with the Rust language.

Thank you to everyone who participated in the Rust Foundation’s calls to action, shared candid thoughts and perspectives on our efforts, and supported our mission in various ways in 2022. The Rust Foundation is entering the new year with big plans, exciting projects, and solid footing. None of this progress would have been possible without the engaged Rust community, Rust Project leadership, our supportive Corporate Members, and our hardworking team.

Happy New Year and cheers to the continued growth of the Rust programming language in 2023!