Board Announcement: Farewell to Shane Miller

Please join us in bidding farewell to Rust Foundation Board of Directors Chair, Shane Miller. 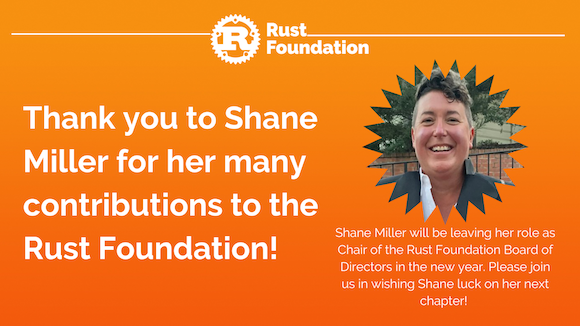 As our Chair, Shane has played a vital role in many different aspects of our organization and has been highly collaborative and dedicated in her position on the Board of Directors. As Member Director for AWS, Shane has done amazing work representing the founding Platinum Member. Shane has been an essential figure in these important inaugural years for the Rust Foundation.

Shane said the following about her time on the Rust Foundation Board of Directors and what’s ahead:

“Building the Rust Foundation has been the most rewarding experience of my career. In our first two years, we transitioned the Rust project from a single sponsor to a cross-industry, global collaboration of forty different corporations representing every size and sector. Our board of directors is a dedicated and talented group of industry leaders, who have leveraged their individual and combined assets to advocate for and contribute to our community’s success; the impact has already been substantial, growing the number of Rust developers by almost 500% to nearly 3 million people worldwide.

There’s still much work ahead, but I know the Rust Foundation has the board of directors and executive staff to deliver results. The Rust Foundation will have a historic impact on the security and sustainability of technology and developer communities, and I am grateful to have had the opportunity to contribute to that legacy.”

“Shane has worked tirelessly over the last two years to help to build the Rust Foundation into a successful and stable organization. She has shaped and championed our work and has been a valuable supporter and mentor to many of us. It has been an absolute privilege to work with her.”

Electing Our Next Chair #

An election for a new Rust Foundation Chair will be held during the January 2023 board meeting.

Thank you again for your service on the Rust Foundation Board of Directors, Shane!