Welcoming Seth Markle to the Rust Foundation Board

Seth Markle joins the Rust Foundation board as the new Member Director for AWS. Shane Miller will be departing as Chairperson in December 2022. 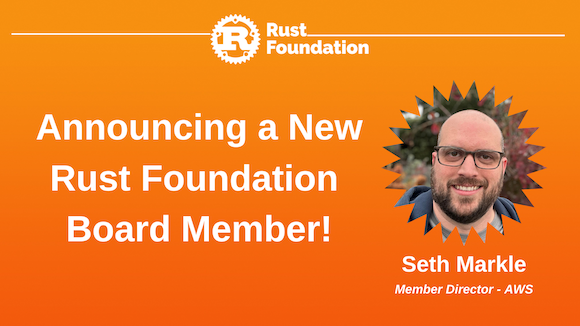 Seth has been a strong advocate for Rust internally at AWS ever since he used it to build a new storage node implementation back in 2018. He is passionate about building correct, highly performant systems that underpin some of the largest infrastructure in the world. On his new role as Member Director for AWS on the Rust Foundation board, Seth says…

“I have seen how Rust enables developers to write highly performant, efficient code while providing modern language features that help ensure correctness across large code bases. We have crossed an inflection point where many developers confidently choose to use Rust. I’m excited about Rust’s continued evolution and thrilled to be a part of the Rust Foundation. I look forward to helping support this diverse community of both users and maintainers.”

We will be bidding Shane a proper farewell in a dedicated post towards the end of her tenure in December. Stay tuned! In the meantime, please join us in thanking Shane for her leadership on the Rust Foundation board!

An election for a new Rust Foundation Chairperson will be held in during the January 2023 board meeting. Board Secretary Mark Rousskov will serve as the Interim Chairperson until a new Chairperson is elected.