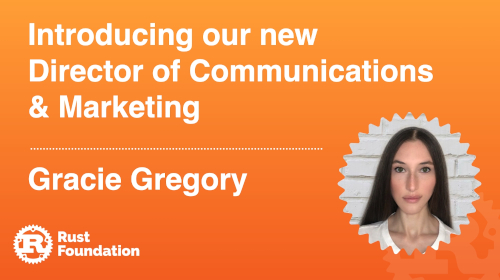 Welcome to Gracie Gregory, our new Director of Communications and Marketing! #

The Rust Foundation exists to steward the Rust programming language, which means supporting maintainers, providing infrastructure, and nurturing growth, adoption and innovation in the Rust ecosystem. A key part of our work is to tell the story of Rust - why the language is awesome, how inclusive and passionate the community is, and what great things are being done with Rust all over the world. Being able to tell this story enables us to promote Rust more effectively, communicate with the global Rust communities and our Members and supporters, fundraise to support Rust’s development and leverage greater resources into the ecosystem.

After months of careful consideration, the Rust Foundation is pleased to announce a new addition to the Senior Management Team – Gracie Gregory who has come aboard as the Foundation’s new Director of Communications and Marketing.

In her new role, Gracie is dedicated to developing and managing strategic communications with the Rust communities, and with Rust enthusiasts and adopters across the world. She is responsible for creating and executing the Rust Foundation’s marketing and communications strategy, with a focus on engaging with the Rust communities, expanding Foundation membership, promoting the use and benefits of the Rust programming language, and championing the interests of the Rust Project.

It was important to us at the Foundation to bring someone experienced into this role, who had a passion for open source communications and community engagement and we found this in Gracie. In a previous position at the Linux Foundation, Gracie collaborated with training and certification, and events teams, as well as with senior leadership and the wider Linux community. She has also worked closely with engineers, open source maintainers, and tech communities in previous content creation and communications roles at Stackery (now part of AWS), and Forem – the open source software behind popular developer community dev.to. Additionally, Gracie served as Program Chair of CodeNewbie’s CodeLand conference for the past three years. In short, Gracie has worked throughout her career in tech to connect with developer audiences through authentic and carefully-researched storytelling, and we are thrilled to have her on board. On her new role, Gracie said:

I’m sincerely honored to have been brought on as the Rust Foundation’s new Director of Communications & Marketing. I believe that a strong communications strategy must be built with a focus on benefitting its recipients – in the case of the Rust Foundation, that includes our members (present and future), brilliant maintainers, and the next generation of Rust talent. The only way for us to achieve this will be for me to listen to the Rust community with the intent to learn from them. I can’t wait to help tell fascinating stories about the Rust project and those using it to build things that will improve the world around us – with the support of the Foundation behind them.

Watch this space for lots of new content. We expect Gracie to be reaching out to a lot of you very soon!