Here's what the Rust Foundation was up to in July, August, and September 2022. 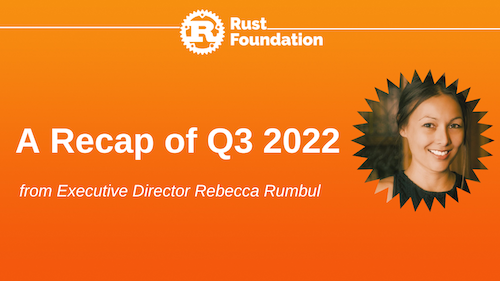 Since November is officially upon us, the Rust Foundation owes a recap of the activities and progress we made as an organization over the last quarter — Q3. Here’s a look at what we accomplished (and the developments surrounding it) in July, August, and September 2022. Towards the end of December, we’ll share a Q4 update post to round out the year! #

The third quarter of 2022 at the Rust Foundation was a unique period that included sowing seeds for exciting developments to come and harvesting the results of long-standing initiatives.

In July, August, and September, the Rust Foundation continued to establish internal policies and practices while evolving with growth in membership, presence at events all over the world, deeper commitments to Project leadership and the Rust community as a whole, and the growth of our team itself.

Some of the decisions we made over the last quarter were in direct response to feedback from the community. In addition to our broader aims to support and fund the people building and governing the Rust programming language, we will also strive to remain receptive to feedback from both our members and Project leadership to accomplish this mission.We are grateful for all of the honest feedback we received from the community in Q3.

Without further delay, here are the details of what the Rust Foundation got up to in Q3. Stay tuned for my Q4 update in the coming weeks for more recent developments.

Following the HR groundwork we laid across Q1 and Q2, the Foundation team grew significantly in Q3 with the arrival of our new Infrastructure Engineer in September: Jan David. This is the first engineering hire to be made by the Foundation and we are thrilled to have Jan in the role.

Jan is responsible for the operations of all currently supported and future infrastructure, including managing both existing tools and new development. Jan David will work directly with the Rust Infrastructure team in their daily activities and will help manage the relationship and efforts between that team and the Foundation.

The hiring process for this position was a close collaboration with Rust Project leaders from application review, to interviews, to the usage of the Applied platform in an effort to remove bias throughout. We were pleased to continue this work at the start of Q4 with additional Communities Advocate and Director of Communications & Marketing hires.

In Q3, we also began the work of establishing an upcoming Security Engineer position, which is part of the Rust Foundation’s dedicated Security Initiative announced in September (underwritten with support from the OpenSSF’s Alpha-Omega Initiative and Rust Foundation Platinum member JFrog).

The way the security team and its funding was announced raised some concerns about how it was communicated to the Project. Since then, options were discussed for a process to ensure that the Project feels informed and heard before similar announcements are made. We are currently collaboratively drafting a job description based on the feedback we have received from Project leadership and expect to publish the job listing and begin active recruitment soon. We are also actively increasing our communication with the Project beyond just the Security Initiative.

In Q3, the Foundation generally moved all of its financial and regulatory actions in-house, having spent Q1 & Q2 transitioning away from most third-party consultants that it was previously reliant on before having a full-time Executive Director.

We expect to have 2-3 trademark policy working group meetings between now and the end of 2022.

Platinum-level membership grew in Q3, with the arrival of our newest member JFrog – an established leader in DevOps. We are thrilled to have JFrog as part of the Platinum tier, which reflects a genuine commitment to supporting the maintenance and development of the Rust programming language.

Silver-level membership also continued to grow in Q3. In September, we were thrilled to welcome TSY Capital and Matter Labs as our newest Silver Members.

The Rust Foundation is currently accepting new members across each tier (Platinum/Gold/Silver).

Membership benefits include representation on the Board of Directors, marketing and thought leadership related to Rust, and more. To learn more about Rust Foundation membership and inquire, click here.

As a 501(c)(6) membership organization, our membership is open to any organization interested in supporting the design, development, or application of the Projects, provided those entities are in compliance with the terms and conditions of the Foundation’s Certificate of Incorporation, Bylaws, Membership Application, and other policies. Members within each tier of membership (Silver/Gold/Platinum) are treated equally and are entitled to the same benefits of membership. We understand that there are strong feelings in the community about whether membership and/or benefits to members should be restricted based on additional criteria, however, our membership structure and the legal landscape we must operate within do not provide for that.

Following the awarding of our first round of Community Grants in Q2, we have been thrilled to watch grantees get to work on their inspiring and important projects.

In Q3, we began conducting calls with Project Grantees and Fellows to learn what they’ve been working on under the program, what their upcoming goals are, and the type of support they need to continue being successful. These conversations have surfaced many interesting stories. As such, we plan to begin sharing “spotlight” style features on our blog that introduce the Rust community to individual grantees to give others a sense of what the program is like and encourage the celebration of Rust Foundation Fellows and grantees.

Note: On October 3, we announced the opening of the second round of applications for the Project Grants program. If you’d like to receive funding for specific packages of work benefitting the Rust Project, we encourage you to apply for a Project Grant by November 7! Learn more here.

Q3 was an exciting time for the Rust community and the Foundation was pleased to help support various events and initiatives during this time.

In August, as a sponsor of the event, the Rust Foundation team was excited to attend the 7th annual RustConf in Portland, Oregon alongside various members of Project leadership. The Rust Foundation hosted a reception on the eve of RustConf’s first day where we were thrilled to see an excellent turnout and many fruitful conversations and connections.

We heard many positive things about the handling of the remote-attendee experience. We look forward to learning how we can support and develop this and other aspects of the conference in 2023.

In September, the Foundation's Director of Finance & Funding, Paul Lenz, and I gave a presentation at Open Source Summit Europe in Dublin on funding open source, with the Community Grants Program as a specific example. I was delighted that our session was packed and coupled with many other exciting talks and announcements including the news of Alpha-Omega funding a dedicated Security team at the Foundation.

September also brought some major Rust-related news that many of us have been waiting for: the arrival of Rust in the Linux Kernel as announced by Linus Torvalds. Though Rust’s presence in the Kernel is still in its early days with just the core infrastructure incorporated, the Foundation sees this as a significant first step in the Rust-Linux relationship.

Finally, we kicked off a new series of guest posts on our blog, which are written by members of the Rust Foundation and/or community. We published our first guest post in July via Dotan Nahum, Founder and CEO of Foundation Silver Member Spectral. Find the evolving Rust Foundation Guest Blog series here.

As you might have gathered, there are many more exciting pertinent updates to share with all of you about Q4 at the Foundation (which is well underway)! Stay tuned over the next few weeks for a recap of our activities in the final quarter of 2022 – and what we’re looking forward to next in 2023.