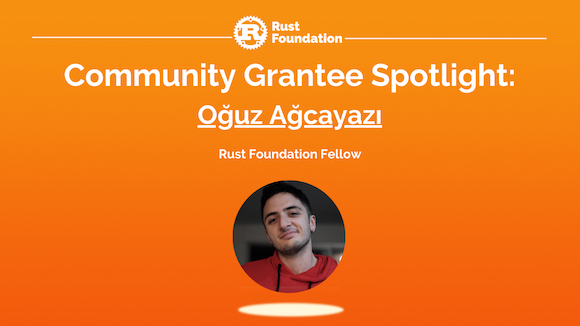 Welcome to the Rust Foundation’s Community Grantee Spotlight series – a collection of blogs that highlights the accomplishments and experiences of individuals who received a  Project Grant or Rust Foundation Fellowship as part of our  Community Grants Program. Each installment features an interview with an individual grantee about their progress, goals, and experiences within the program.

Our intention for this series is to celebrate our hardworking grantees while shedding light on the wide breadth of work they are collectively doing to benefit the Rust ecosystem. We hope you enjoy getting acquainted with these amazing individuals!

Note:  The Community Grantee Spotlight series will not function as a comprehensive catalog of all our grants/grantees, but instead will highlight a handful of individuals who expressed interest in participating. Please stay tuned for a new page our team is working on that will include info on the grants we’ve issued to date. In the meantime, you can find our most recent announcement of Rust Foundation grants here  – with more to be announced soon!

>>Learn more about this grant

Fun fact: “I have never played football in my life but I used to manage a team in college.”

“Special thanks to Oli for his mentorship, compiler-errors for answering my endless questions, and the Rust compiler community for being awesome.” #

Q: Tell us a bit about your background with Rust prior to the Community Grants Program #

It’s actually quite an interesting story. In the summer of 2020, I was working on making a Roguelike game. I was part of a Discord channel about it where developers met to discuss this type of project. I met someone in that space who read my messages about what I was working on and they encouraged me to switch from C++ to Rust. They told me that it was a better use case because of the way it handles errors (Rust doesn't have exceptions). Initially, I was skeptical. I mean, Rust was completely new to me so I wasn’t sure if the learning curve would be worth it – at the time, I just wanted to make my game! But after some preliminary research, Rust looked really interesting and I made the switch.

Then, a year later, that same person who encouraged me to make this switch later published a book about making a game with Rust. I started porting my game to Rust and everything went really well after I got over the initial hurdle. Rust was totally smooth sailing for me after I got up to speed with it.

Q: Can you point to anything that helped get you over that initial hurdle you encountered when learning to code with Rust? #

I think the most important thing is to dive into some of the most commonly-recommended resources. They are recommended for a reason! Definitely start with the Rust Book and after having some understanding, check out Rustonomicon. In my opinion, it's the best coding resource for any language on the web.

Overall, my advice is to read as much as you can and start writing Rust code as soon as possible. That’s “all” there is to it – it's hard work, but it's worth it. Granted, you will initially fight with the Rust borrow checker, but you will eventually become friends with it. I suppose the TL;DR is read, write, and keep your eyes on the prize.

Q: What was your mindset like when you applied to the Rust Foundation Community Grants Program?  #

I have to say, I wasn't excited by the prospect of a Rust Foundation Fellowship, per se, because I wasn't expecting to get accepted. I thought, “Hey, I'm just a ‘small contributor’. Why would [the Rust Foundation] ever accept me?” I thought, “there's a group of people that are way more interesting than me, way more talented, way ‘better’.” Luckily, I came to understand that the Rust Project is welcoming to new contributors and it was more than ok for me to try my hand at applying for something like this. I eventually went ahead and applied – and to my surprise, I got accepted!

Q: What are some of your main goals as a Fellow? #

Ultimately, I’d love to be a member of the Rust compiler team – but it certainly will take me time to get there. Luckily, I'm being mentored by Oli. He is fantastic and knows so much about the compiler but I’m clear-eyed about the fact that it will take me more time to achieve that level of mastery. I don’t think I’ll achieve this goal under the Community Grants Program as it will take a couple of years, but I think I might get into the MIR optimizations working group, hopefully doing my work on the MIR. If the group admits me, that's great but I’m not in a hurry.

My other big goal is to record YouTube videos about my journey with Rust with a beginner-focused message. I want to broadcast my progress for other people to benefit from and possibly even host a regular livestream on Twitch. I’m currently collecting the equipment to do this but I want to accomplish some more heads-down work first. My message with this content would be to show a beginner that, while Rust has a learning curve as we talked about, you’ll see real progress relatively quickly and sail on from there.

Q: Has being a Rust Foundation Fellow changed your life in any major practical ways?  #

Absolutely. When I started the program, I was working on getting my Masters's degree in philosophy. One day I thought “hey, I can complete this degree whenever I want. There’s no harm in taking a break, revisiting it down the line, and focusing on this new interest full-time.” So, I dropped out of that and was able to focus on Rust and have an income! This program affords me the ability to pour all my time into working on Rust, especially because I live in Turkey and the stipend goes a very long way here.

Q: Has being a Rust Foundation Fellow changed your outlook on the future in any way? #

Actually, it changed a huge facet of my perspective on life in general. It’s really incredible knowing that this entity is there not only to support you but to pay you for doing what you love. I’ve never experienced that before. What’s so fantastic is that the Rust Foundation does not put forth any harsh requirements. They don’t ask grantees to clock in every day or anything like that. There is trust and freedom. What’s also been amazing is the feeling that I’m a member of a wonderful community. It’s made me feel validated, boosted my confidence, and ultimately makes me want to pour more time into Rust — and fall even more in love with the language! This program has even made me more committed to the larger open-source community. Overall, it’s been huge for me.

Q: What’s coming up next for you as a Rust Foundation Fellow? #

I have so many ideas! I’d love to make a podcast that features Rust compiler contributors talking about what they do on a daily basis, how they gained the expertise they have, and how they're affecting the language. I also plan to make a video that starts from the beginning of the first tiny step in contributing to Rust. In that video, I’d pick an issue and try to solve it in real-time. Even if I can’t solve it at that time, I want to show the entire process because , let's face it, you can’t always expect to solve everything in the clean narrative arc that many videos try to depict. For example, a few weeks ago, I spent 20+ hours on an issue that was much harder than I was expecting. I ultimately took a break and returned to it. I think it's really important that our industry and, specifically, the Rust community, regularly showcases this process in an honest way.

To sum it up, I think what’s next is creating some really helpful and welcoming content for Rust newbies.

Q: What are you most proud of having accomplished under the program? #

I have been mentored throughout the whole process so I have to give a lot of credit to those who have helped me succeed. But I have created some optimization code that I spent months and months working on. That’s what I’m most proud of so far because it affects every user. I’m really proud of that.

Q: If you had to pick one word (or maybe a few!) to describe your experience under the Community Grants Program, what would it be?  #

As a Rust Foundation Fellow, I've been able to pour more time into the Rust ecosystem, which has boosted my confidence and made me fall even more in love with the language. Being a part of this feels like sitting next to a fireplace and talking with family. The Community Grants Program feels like home. 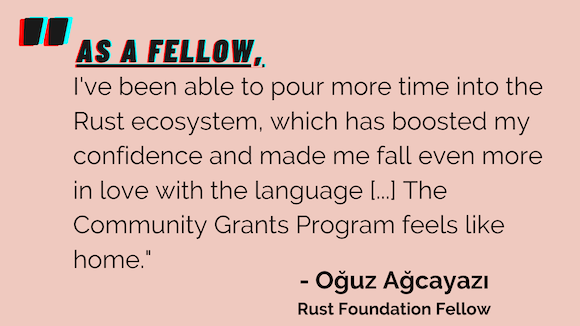 Q: Do you have any thoughts or advice for future applicants to the Community Grants Program? #

I think if you’re enjoying what you’re doing and if you feel like it could/does make a difference in the Rust community or to the language, apply! To me, the baseline for applying to this program is that you feel good about the future of Rust and the work you’re doing. I also have to add that there are so many nice and knowledgeable people in the Rust community who will be really helpful to you if you become a grantee. The Rust Foundation is basically saying, “hey, we’re here to help support you in doing what love” – so why not apply?

Q: What excites you most about Rust/the future of Rust/the implications of Rust?  #

I was very excited to see Rust incorporated into the Linux kernel. I can’t wait to see what’s next with that!

The Rust Foundation Community Grants Program was made possible in 2022 by AWS, Huawei, and Google. Learn more about the program here.  #

If your organization is interested in supporting the program, we'd love to hear from you! Please reach out to us at grants@rustfoundation.org to inquire about donation/support options.  #