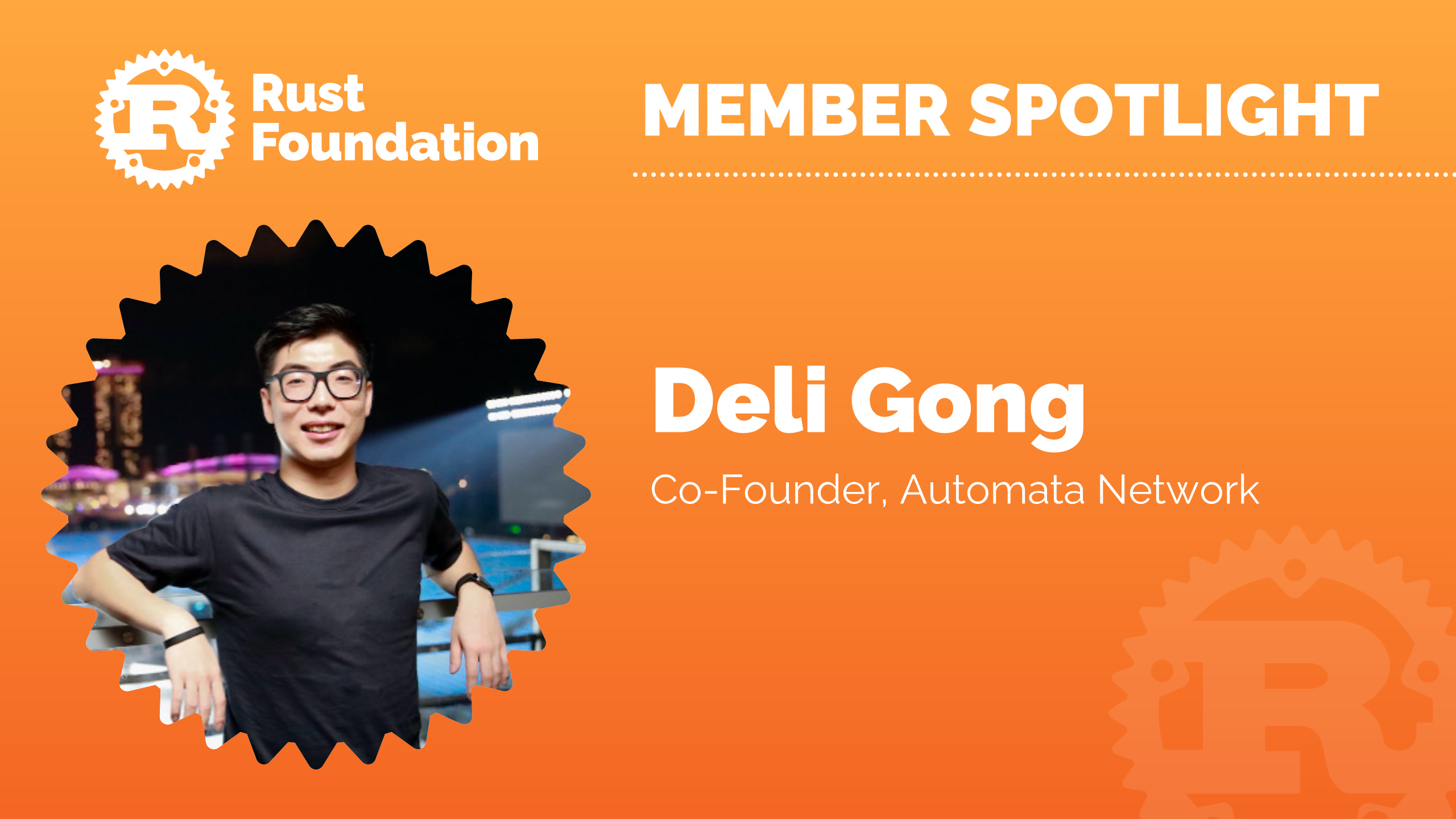 After a brief hiatus, we’re excited to be back with another entry in our member spotlight blog series and another introduction to one of our great Rust Foundation members. Each post in this series is designed to introduce the community to a new member company, sharing details on its work, its use of Rust and its hope for the language going forward. In today’s installment, we received input from Deli Gong, Co-Founder at Automata Network. Here’s what he had to say:

Introduce us to Automata Network. What do you do and who do you serve? #

To those who are new to us, Automata Network is a decentralized service protocol that provides middleware services for applications and blockchains so they are able to achieve traceless privacy, high assurance and frictionless computation. To break that down further, there are essentially two components to why we do what we do. The first is that we are firm advocates of a fair Web 3.0. We foresee privacy playing an important role in safeguarding a future that is collectively owned by the people who build it, and the people who use it. That’s important to us.

Secondly, we believe in a multi-chain Web 3.0 universe, but native applications and blockchains don’t often come built-in with the kind of privacy features designed in mind for the end-user. Several products in our technology suite are designed with privacy protection in mind, such as Witness, which offers off-chain governance, or Conveyor, a solution that tackles front-running on the blockchain. Most recently, we also celebrated the launch of XATA, a Fair Liquidity Provisioning Protocol that is powered by none other than Conveyor. So, we’re taking concrete steps towards that privacy-first future we originally envisioned, and we are very excited about it.

Automata Network is also currently hiring across several departments to boost our ranks and bring this important vision to life. If you’re keen, visit our careers site to find out more and join us in delivering the future.

Tell us a bit about how Automata is using Rust. How do you expect to use it in the future? #

There seems to be a point in blockchain technologies where the immutability of things are often shouted about, and that’s great, but there’s a lot of fine deliberation that goes into the work. When code is written almost in a one-way function, especially in DeFi, once it’s done, it’s done. There are no edits or adjustments you can make to a smart contract once it’s deployed, so there’s a lot of emphasis on the language being used - and Rust is a great programming language. For example, with Rust, there is a set of semantic rules enforced within the language to prevent bugs, and that’s really helpful in helping developers not write code that eventually fails, even if the program runs. When we think of it as being functional, we consider Rust as a language that really makes it quite hard to mess it up, just because it’s built to highlight any errors at the source.

Some of this popularity, we think, also comes from a real desire we are seeing from developers who realize blockchain projects and ecosystems are here to stay, and who are starting to take notice of Rust as their programming language of choice. Polkadot, for instance, is built on an open-source framework called Substrate, which is Rust based, so there’s also a natural inclination there.

What was Automata's motivation to join the Rust Foundation? #

Developers seem to really enjoy the language, but that’s not to say that there hasn’t been a relatively steep learning curve with Rust. With our participation and close alignment with some of the more active and biggest blockchain communities out there, we aim to help support developers on their journey as they start learning more about Rust - things they wished they might have known from the beginning, hurdles as they start being fully productive, finding the right resources to build on their knowledge, and the list goes on.

Most recently we published the first of our #AskAutomata technical series and the first article was a how to guide on creating a custom RPC subscription in Substrate, which is built on the Rust programming language. We want to create more tutorials and developer documentation to help the community get the most out of their experience.

What do you hope the Rust Foundation will accomplish in the months and years ahead? #

The Rust language official slogan is, “A language empowering everyone to build reliable and efficient software,” but we happened to also read that an earlier version of that sentiment was penned down as, “A language empowering everyone, but especially folks who thought that systems programming wasn’t for them.” Rust is a promising technology, and we at Automata hope to continue the same collaborative spirit that has served the programming language from its inception by making it accessible to a wider and growing community. The development work around Rust is super important. We believe the Foundation's continued success will come from supporting that work in addition to the valuable marketing, documentation and team-building efforts that make a community thrive.

As a C/C++ developer for quite some time, I got addicted to Rust the first time I ran into it. I didn’t feel a steep learning curve thanks to a few nice getting-started guides and books from the Rust community. It didn’t take too long to go from playing around with some hobby projects to building our own technical solutions. When we founded the Automata Network, it was quite natural to use Rust as it works well in offering low-level primitives as well as high-level frameworks. The best part is that we have all we need from the open-source community and it’s just the right time to build ours and contribute back to the community.