Lars Bergstrom Elected as Rust Foundation Board of Directors Chair 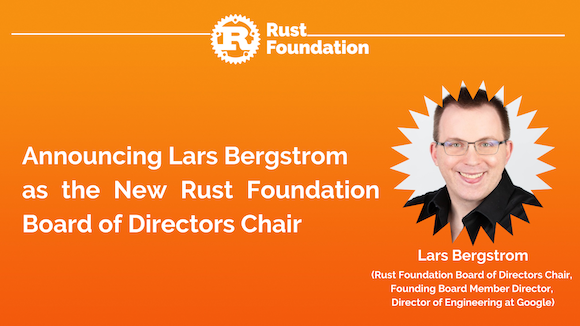 The Rust Foundation is pleased to announce that Lars Bergstrom has been elected as our new Board of Directors Chair. Lars takes over from former Chair, Shane Miller who stepped down from the board in December.

Lars was elected to the Chair position through a live vote amongst the Rust Foundation’s Board of Directors during its first meeting of 2023 on January 10th.

We are thrilled to have such an experienced open source leader and Rust advocate as our new Chair!

Lars’ first experience with Rust was in 2013 when he joined Mozilla to work on the Servo project, building an entirely new browser engine. As a foreshadowing of his current role at Google, he primarily contributed to mobile support and build systems and infrastructure. As Lars took on more of a management role, he focused on finding ways to accelerate the integration of this Rust code into other projects, including Firefox.

In his Director of Engineering role at Google, Lars manages the teams that provide the compilers, tools, runtime, and libraries used to build the Android operating system. He has accelerated the adoption of Rust in the Android operating system and supports both other Google teams and partners in their adoption of Rust. He was a founding Rust Foundation Member Director for Google.

About his new role as Rust Foundation Board of Directors Chair, Lars said:

“It has been a privilege to accompany Rust through its growth over the last decade. From a few folks working on a new browser and language to starting an independent community to seeing adoption in use cases very different from browsers, it has been thrilling to see the project overcome the challenges at each new stage.

Today, Rust faces new and exciting opportunities related to security and safety in our systems and supply chains, adoption by a much broader set of companies, scaling up the support for the Rust Project, and much more. I’m excited to do what I can to help the Rust Foundation rise to meet these opportunities.”

“With a period of continued Rust growth, adoption, and related challenges upon us, it is of paramount importance to have the proper leadership in place to help the Rust Foundation rise to the occasion. Given his vast experience with open source and in the Rust ecosystem, I am thrilled to have Lars serve as Chair of the Rust Foundation Board of Directors. I believe he is perfectly suited to guide our board through this exciting era.”

While Lars Bergstrom has been a valued member of the Rust Foundation Board of Directors since the organization’s inception, we would like to take this opportunity to welcome him to the Chair position. We look forward to a productive and collaborative period ahead under his leadership.

You can connect with Lars on Twitter and LinkedIn.