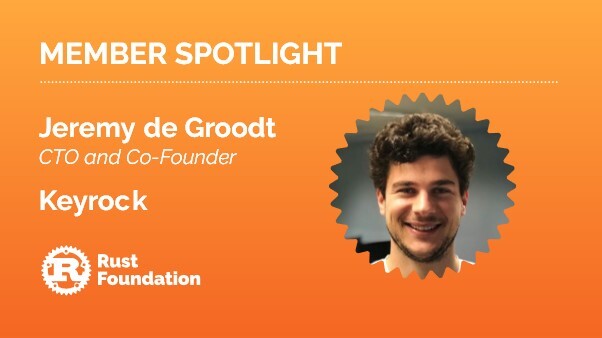 Welcome to our latest Member Spotlight blog! Jeremy de Groodt, CTO and Co-Founder of Keyrock, talked to us about their work and how they’re using Rust.

As Keyrock, we have been very invested in Rust technology for about 2.5 years now. Rustaceans are a tightly knit community and very early on it was clear to us it is in our DNA to give back to it.

As an algorithmic trading market maker in the digital assets field, we operate in a niche not many people are aware of. We stand at the intersection of DLT and Finance and we strongly believe that the tokenization of digital assets will change the world as we know it, for the better. For us to be able to achieve the grand vision of democratizing liquidity services at scale, to foster this wave of technological innovation, we are convinced we can only achieve it by being able to rely on a robust technological foundation, and one that can withstand scale and the intensity of 24/7 operations. Having realized this early on and having had the luck to be able to explore Rust technology with some of our team members at an early stage of our growth, we not only want to be more visible on the scene and connect to developers who also love Rust and solve similar problems to us. We also want to build a powerful bridge of collaboration by evangelizing “RustFi” as a sub-niche. We strongly believe the use of Rust as a Web3 financial technology driver will be the essential building stone for the future, and being able to share our story and meet like-minded Rustaceans is the main reason for us to join the Rust Foundation.

Why did you choose Rust for your particular application or use case? #

Rust was created building on the learnings of the development community gathered while using other programming languages for the last 40 years. It keeps certain desired characteristics of a low-level language - speed - while also adding safety on top: it will not compile unless the code is correct. This made Rust the best, most optimal choice in our view as a foundational language of our complex, distributed trading systems.

What are your predictions for the Rust language and / or Rust community over the next 18 months? #

Shortly speaking - broader commercial adoption, especially in the financial industry. We see it already rapidly taking up the share of C++ as more and more companies transition to Rust and we believe this trend will only continue.

What advice would you give to developers who are considering using Rust? #

Be humble, patient and do not get discouraged while learning. We see many inexperienced developers writing Rust in similar ways to different languages while in fact it has its own very distinct ways and requires a different approach to solving problems while using Rust. Keep an open mind and accept that the Rust learning curve is as steep as “El Capitan” ;)

We recommend to everyone interested in Rust this series of articles by one of our early joiners, Rust advocate and current VP Product of Keyrock, Kushal Joshi: https://dev.to/kushalj/18-factors-powering-the-rust-revolution-part-1-of-3-3imc

What do you say to the crypto naysayers, the folks who might consider Keyrock a crypto scam business? How is Keyrock different from some of the companies or stories our community might be concerned about? #

We understand the frustration and concerns of many. After having been more than 5 years active in the industry, we can say we have seen a lot of things happen and still see passing by. Technological innovation is more often than not accompanied by those who want to take shortcuts or take advantage from misinformation, and builders that create a problem to a solution. The world has seen it happen in the past, and it will happen in the future. More than ever we realize that cyclical trends are there for a reason – a cycle of adoption, learning, experimentation, quality filters and evangelization, followed by one of blunt mistakes, greed, immaturity, lack of substance and dishonesty. Many actors join, many actors leave. We welcome it. We do believe more than ever, the industry as a whole is at a stage where the actors, talent, technological entrepreneur spirit, adoption and maturity is so developed, the next few years will be incredibly exciting to follow and be part of. Our conviction is sound and we are not the only ones. To anyone who is familiar with the ecosystem it is very clear Keyrock is a financial entity that is not just a market neutral and agnostic infrastructure player, it is moreover an essential part in the adoption cycle of healthy, efficient and fair tokenized economies. By providing liquidity services, at scale, to the founders and developers of the future, we not only create the financial foundation for these economies to be built on, they can also thrive and promote adoption in a fair manner. We are not reinventing the wheel, as market makers have been around for years in traditional finance; we are just building it to be adapted to democratized financial markets. At scale, 24/7, from the ground up and robust.

For us the logical rule of engagement with any entity is to follow strict due diligence practices to make sure we do not engage with anyone who practices market abuse. We never engage in any malpractices like market manipulation for either our own or our partners’ gain. Early on, we made investment in regulatory affairs, speaking closely with the governments and financial regulators of many global jurisdictions by appointing a Head of Compliance, which hopefully shows our dedication to operating with integrity. We are also in the process of applying for licenses in the UK and Belgium, which will put us at the forefront of globally regulated, crypto-native financial institutions.

What is your product or service, specifically? Can you describe it in more specific terms than the foundation on top of which token economies thrive or digital assets are built? #

Our core service is market making, also called liquidity provision. In simple terms, by constantly, algorithmically quoting buy and sell prices of digital assets on multiple markets and for multiple tokens, we make markets liquid for regular buyers and sellers - it enables them to transact easily, at any time, at a fair market price, which is an attractive and healthy attribute on the market.

Our aim is to refine our solutions and make liquidity accessible to as many clients as possible as we believe it will create the financial foundation for tokenized economies to be built on.

We invite everyone passionate about Rust and interested in financial markets to take part in our RustFi Hackathon - an event of the season where Rust, Financial Markets and Web3 meet. We organize it in an attempt to advocate the use of Rust within the financial domain and create a space for the community to network, share and innovate.